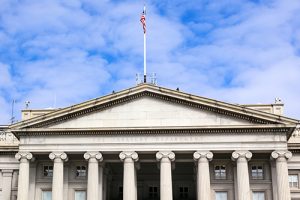 While media headlines have obsessed over a lack of liquidity in corporate bonds, some market experts appear to be more nervous about U.S. Treasuries, which is the largest and most liquid asset class in fixed income.

Electronic trading has grown in U.S. Treasury bonds just as it has in equities and foreign exchange, but recent price volatility and worries about liquidity disruptions are sending jitters through the ecosystem.

Choppy markets and extreme price swings have unnerved traders and asset managers in U.S. Treasury bonds, who are glued to their screens for the latest news on Greece, monetary policies or hints on futures actions from central bankers Janet Yellen or Mario Draghi.

Now there are worries that this highly liquid $12.5 trillion U.S. Treasury bond market could be vulnerable to “air pockets” when liquidity disappears if the Federal Reserve were to raise interest rates later this year.

A snapshot of what could happen occurred on Oct. 15 within a 15-minute window when yields on a benchmark Treasury note plunged for no apparent reason with record volumes and intraday volatility.

On Oct. 15, traders scrambled to react to a stunning rally in Treasuries that sent yields on the 10-year note plummeting to an intraday low of 1.87% within minutes, their biggest one-day decline since 2009, reported The Wall Street Journal.

According to the Securities Industry Financial Markets Association, average daily trading volume for Treasury bonds was $433.6 billion in April, down 17. 3 percent from March’s $524.5 billion, and the lowest volume recorded since 2009.

Some are blaming the surge in volatility on the rise of electronic trading and the proliferation of computerized algorithms that are already pervasive to equity, futures and foreign exchange markets.

But this is ignoring a number of other factors in market structure, regulations and central bank monetary stimulus programs that have led to unintended consequences.

The real point here is that the “issue” with liquidity should not be simplified by saying that the seven-sigma event that took place in the UST market on October 15, 2014 was simply a function of electronic trading and people stepping away as a result of technological speed.  That’s a convenient explanation- an oversimplification of the underlying market conundrum.  It has to do with much larger structural issues with technology being only a part of it, wrote CrossRate Technologies in a blog, “Bond Liquidity Has Changed – Why are You at All Surprised?”.

In response to regulations, banks have downsized their fixed-income trading operations to save costs and lower headcounts.

Regulations such as the Volcker Rule and Basel II have pushed banks to exit riskier activities, such as market making and proprietary trading, which has taken a toll on liquidity. In response, dealers have cut their inventories of Treasury bonds, due to high capital charges, which in the past were viewed as shock absorbers.  Less depth in the market means it’s easier for big trades to move the market.

Industry observers are speculating that large dealers are not going to step in ‘to catch a falling knife’ if the market is declining.

Additionally, the Federal Reserve has purchased $3.5 trillion in bonds as part of its stimulus program.  There is also uncertainty around when and how the Fed will decide to unwind its bond portfolio.

The Market Structure is in Flux

Nearly 50 percent of the Treasury market was traded electronically last year, and this is expected to reach 60 percent by the end of this year, according to a North American Fixed Income survey by Greenwich Associates.

Here are seven factors to consider about the market structure in Treasuries:

The inter-dealer market in “on-the-run” Treasuries is an automated market where dealers and hedge funds utilize algorithms and fast data feeds to stream two-way prices.

The main networks for bond trading by dealers are eSpeed, owned by Nasdaq OMX and BrokerTec, owned by ICAP plc. High frequency trading firms are estimated to account for half the trading volume in eSpeed and BrokerTec.

Execution management systems, such as FlexTrade’s FlexTRADER, are able to connect traders directly to these bond-trading platforms. “The goal is to bring electronic access to government bond trading,” comments Vijay Kedia, President and CEO of FlexTrade Systems. Dodd Frank is also requiring trading in interest rate swap and credit default swap exchanges to move onto swap execution facilities. As we continue to integrate with multiple SEFs, the buy side can search for the best price,” said Kedia.

Fixed income technology has increased in sophistication, and can operate at low latencies, but the fastest players have an edge. Using algos and microwave networks to access data feeds, market makers in fixed income strategies can be collocated in data centers nearest the matching engines and automatically hedge their positions faster. This means, participants can express their views on market risk much faster than others.

Buy side traders execute in the dealer to customer (D2C) marketplace.  Here, they input their positions manually, though the dealers use automated quoting.

The top eight dealers have about 60 percent of the D2C business. They have large internalization engines which seek to match buyers and sellers across various internal desks before accessing liquidity in inter-dealer markets. Dealers have also built their own single dealer platforms (SDPs) using algorithms to generate streaming two-way bids and offers for their customers. Similar to foreign exchange markets, FlexTrade is working with multiple dealers to offer integrated liquidity to the buy-side. New venues are emerging that will allow  algorithmic trading firms to stream Treasury prices directly into bank trading floors, reports The Wall Street Journal.

Non-bank electronic market makers are stepping in to compete with banks on their turf in Treasury bonds.  For example, Citadel, a large participant with investment banks is seeking to expand by trading directly with clients on D2C platforms reports the Financial Times.  As Wall Street dealers retreat from risk-taking in Treasury bonds, the FT article suggests that new entrants have an opportunity to play a heightened role.

With all of these flows interacting in U.S. Treasuries, another point to keep in mind is that information is transmitted instantaneously.

Price swings can become extreme when there is the slightest news. “The minute you talk about some geopolitical risks, the liquidity starts dropping,” notes Kedia. If there was a crisis in Greece or the Middle East, the whole liquidity picture could change on a dime.  “The trend toward electronic trading is going higher, as long as it’s conditional on there being stable markets, emphasizes Kedia.  If bond prices were to decline, buy side firms are going to pick up the phone to talk to their brokers, says Kedia.

In a white paper published on April 9, 2015, the Treasury Market Practices Group, a group of market professionals representing the largest Wall Street dealers, warned of potential risks of automated trading in the Treasury market. “Automated trading has the potential to increase short-term volatility in financial markets by transmitting idiosyncratic shocks from one market to another.”

With a less liquid Treasury, market leaders are thinking of ways to dampen any bursts of volatility. According to The Wall Street Journal, ICAP plc is studying the idea of imposing circuit breakers to halt Treasury trading after large price moves. Implementing these controls to halt trading would be an “unprecedented” step in U.S. government bond trading, but it would resemble controls already enacted in U.S. equities, the WSJ noted. This is also a reminder that automated trading comes with many benefits, but also can lead to unintended consequences.

(The next post, Part 2, will cover the role of Corporate Bonds.)

For a complete review of your firm’s Fixed Income trading requirements and how FlexTrade can help, please contact us at sales@flextrade.com.