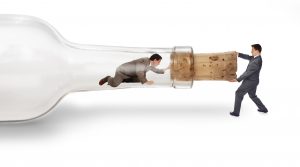 The regulatory overhaul of the OTC derivatives market has brought mandatory clearing and electronic trading to standardized swaps, but many say the market structure is stuck, citing regulatory ambiguity and separate liquidity pools.

While a significant portion of volume in interest rate and credit default swaps has shifted to new trading venues, panelists at the SEFCON VI conference on Oct. 26 contend that the jury is still out on whether the market structure has changed.

“There are some people that were expecting a different state of play, less focused on the bifurcated market. People have seen progression but it has somewhat stalled,” commented Graham Harper, Partner at Delta Strategy Group, who spoke at the swaps industry conference.

Panelists cited the persistence of separate dealer-to-dealer pools and dealer-to customer venues as evidence that the market structure had not changed.

“Two years into the new market structure, 100% of dealer to customer trading is confined to two venues, and all the dealer to dealer trading is on five or six other platforms controlled by dealers,” commented Stephen Berger, Director, Government Affairs, Citadel. “I think that you still have this bifurcation of flow [which] is not reflective of policy objectives or a healthy market going forward,” said the Citadel source.

Currently the dominant method of execution is request-for-quote, where buy side firms give up their names to dealers. SEFs operating both RFQ and order books also give up the names of the counterparties.  In the interdealer market, where there has been a significant move to electronic trading, voice and telephony generate the trades, which are then processed electronically through the SEF, said Anthony Perrotta, Jr., principal and head of fixed income research, TABB Group.  Perrotta suggests the move to electronic trading looks more significant than it really is because of how it’s processed.

SEF Progress: By the Numbers

Even with some of the flaws, it’s hard to dispute that the swaps trading landscape has undergone a massive migration to electronic platforms.

“In the pre-SEF world, prior to February 20014, less than five percent of swaps traded electronically, and 18 months later, roughly half are electronic,” noted Jon Williams, managing director, institutional operations at Tradeweb, referring to data from the International Swap Dealers Association. Not surprisingly, the instruments that make up the bulk of electronic trading are the most liquid, the easiest to quote and arguably the most tightly traded instruments. 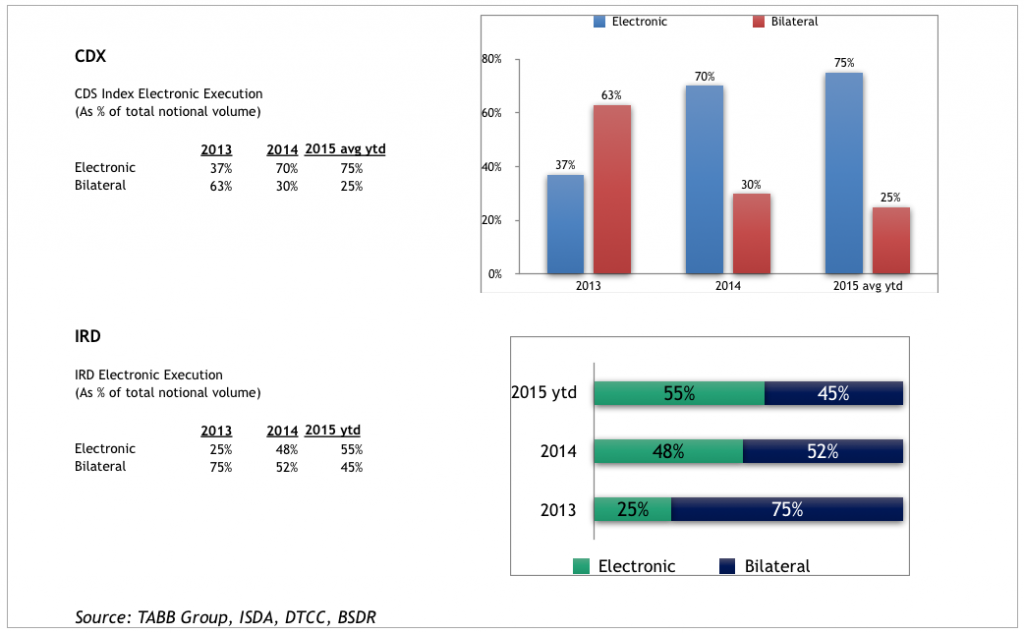 Even though trade flows have migrated to electronic platforms, the jury is still out on whether volumes have increased. “With respect to volumes, we have not really seen a significant pick up. If anything we see stagnation in volume because there is some market ambiguity as to where the market is going,” says Perrotta.

Three factors are driving the derivatives business and the stagnation, according to Perrotta. One is uncertainty around market structure; two is ambiguity around harmonizing cross-border trading regulations. The third factor is cost in that it’s far more expensive to trade derivatives, certainly non-cleared derivatives, now than in the past, he said.

The issue of harmonizing SEF trading rules with those of European regulations under MiFID II was a hot button at the conference.  CFTC Chairman TimothyMassad told the SEFCON VI audience he was speaking with his counterparts in Europe. “I am very committed to the goals of trying to harmonize and trying to find a framework where swaps can take place across borders globally,” said the top derivatives regulator.

A panel focusing on geopolitical risks in swaps trading examined the likelihood of equivalence between the EU and US swap trading regulations. Several panelists noted that they used to have one global pool of liquidity and now liquidity is fragmented. “Equivalence is necessary because both sides of the Atlantic largely are integrated, “said Antonio de Lecea, Minister, Principal Advisor for Economic and Financial Affairs, Delegation of the European Union to the US. But the transcontinental market is the largest market, accounting for 90% of swaps and future markets, he said.  Since the US came out with the SEF mandate first, a lot of the big institutional clients and the big banks have moved this trading overseas to avoid falling under the US SEF regulations. When a non-US dealer trades with a US person, it must trade on a SEF, said a speaker on the panel. Europeans are not that excited about coming into the US jurisdiction and vice versa.

Part of the danger is regulatory arbitrage causing institutions to regionalize their trading by currency with euro-denominated going to trading venues in Europe and dollars swaps staying on SEFs. Until all three of the major regions across the globe get on the same regulatory regime, liquidity in the U.S. could suffer because people don’t want to actually deal with the regulatory requirements on a SEF.

On the European side, EU officials worry that their rules on pre-trade transparency are too aggressive, and could create issues, noted Edwin Schooling Latter, Head of Department, Markets Policy and International Division, Financial Conduct Authority (FCA). Differences between rules for SEFs vs. MTFs and OTFs need to be resolved.  For instance, there’s a best execution requirement for swaps under MiFID II, while no such requirement currently exists for SEFs. And while the US has an RFQ 3 requirement that customers request prices from three dealers, MiFID execution rules are less prescriptive.

Another concern is that liquidity providers are said to be pulling back.

Post-financial crisis regulations, such as Basel III, are also hampering dealers from committing capital. “I think we’re squandering time. Basel III is not slowing down. Dealers are retrenching and if we don’t start changing things around it will be to our detriment,” said Declan Graham, head of business development –Execution for UBS Investment Bank.

The entrance of non-traditional liquidity providers can serve as a catalyst for change. “The idea of building out the fabric of a more diverse liquidity pool in advance of new capital requirements going into force,” is a top of conversation, according to Graham of Delta Strategy who works with proprietary traders. “Those types of firms that would step in and standardize the swaps market also feel there is some access issues and market structure issues before it makes sense,” said Graham of Delta Strategy.

Some suggest that the non-traditional liquidity providers are less interested in becoming market makers than they were when Dodd Frank was passed in 2010. High speed trading firms would like to enter the swaps market as liquidity providers but the current method of RFQ is too slow for them, according to a Bloomberg.

If new liquidity providers enter the market, speed could become more of an element in swaps trading, and possibly could drive out existing market makers that are less technology savvy.

“The buy side hasn’t really changed their behavior all that much from a couple of years ago beyond using an RFQ rather than using the phone,” observed moderator Kevin McPartland, head of market structure and technology at Greenwich Associates, who asked why this is the case. SEF operators conveyed there was low demand for order books on the buy side.

One reason is that “historically takers of liquidity have interacted with providers of liquidity one-on-one. Secondly the sizes of [swaps] transactions are fairly large,” explained Tradeweb’s Williams. “Historically that doesn’t lend itself well to the order-book DCM [designated contract market] style trading, [where] sizes of executions tend to be relatively small or smaller,” he said  Another obstacle is the need for operational tools that meet the buy-side’s workflow for executing on order books.

Asset managers need to trade on behalf of hundreds of individual accounts during the course of a single transaction. If an order is executed with a multitude of steps, potentially at different prices, there needs to be a mechanism to account for that, explained Williams.  “From a systems and operational perspective that is certainly an issue to deal with,” he said.

What The Future Holds

Still many believe the shift to a more automated, anonymous form of trading, known as an all-to-all market place, is bound to occur in the future. But, there may not be a big bang regulatory event that will push it.

In his speech, CFTC Chairman Timothy Massad said that over the next 12 months the regulator’s focus will be “to improve and further encourage the open, transparent and competitive trading of swaps on SEFs.”

However, the industry’s top derivatives regulator said that the Commission is not going to force SEFs to abolish name give-up or push for anonymous trading, suggesting that the market will evolve on its own.

“There are different views in the commission on whether this is something we should take action on, or wait to see how the market evolves. For the time being, we’re not taking any action,” said Massad.

Over time, sell siders expect the buy side to try out other protocols.  Flexibility was a word mentioned by several panelists, adding that for some transactions they would like an order book, for some an RFQ model, and, in some cases, an auction as well as crossing.  The biggest impediment is lack of liquidity and developing a more diverse set of liquidity providers.  Why are non-traditional liquidity providers waiting on the sidelines? Will asset managers step in? Which trading protocols does the buy side want? Next week Part II will examine these questions.

Insights
Comments are off for this post.
The fixed-income trading space has exploded with innovation from electronic trading protocols to new pricing services. In recent years,...

Insights
Comments are off for this post.
Banks and asset managers relied on global teams to backup and transfer workloads during the pandemic. But, in moments...