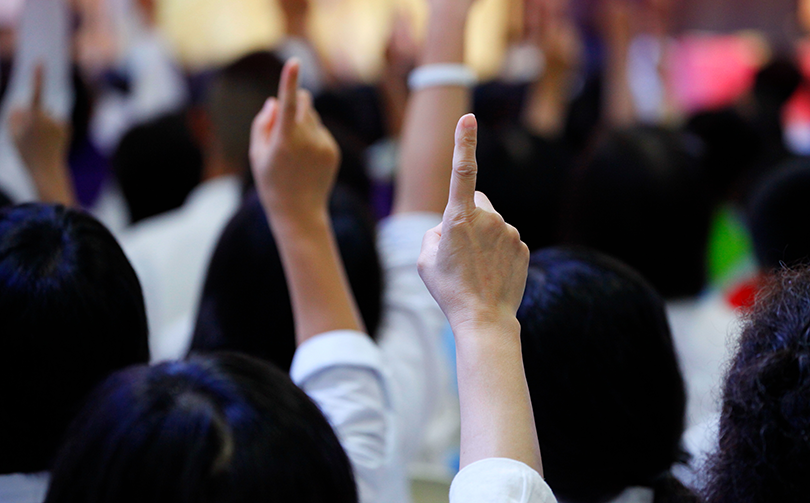 The Securities and Exchange Commission’s plans to overhaul stock trading rules are starting to materialize, and the first set of proposed rules to emerge could focus on routing small retail orders to auctions with midpoint prices.

On Oct. 27, the Wall Street Journal reported that the SEC is considering a proposal that will require brokers to route retail investor orders to auctions, “where trading firms would compete to execute them, people familiar with the matter said.” The WSJ’s sources said the agency is expected to release details on auctions in November, which could set up a clash with Wall Street’s large market makers and retail brokerage firms.

But the industry’s top wholesalers and brokerage executives speaking at STA emphasized that the stock market is functioning well for retail investors and cautioned against making a litany of changes that could lead to worse results.

“At the end of day, (we offer) immediacy around execution at zero commissions in 10,000 names, at a size you want, at a price that is better than an institutional investor. Why are we taking this giant anvil and trying to hit the theoretical nail?,” said Doug Cifu, CEO of Virtu Financial in an interview at the STA conference.

However, in the June 8 speech, Gensler said that most retail orders are sent to wholesalers, which pay for the right to process their trades, as opposed to public exchanges. He pointed out that pension funds and other institutional investors cannot directly interact with retail flow. To address these issues, Gensler talked about “leveling the playing field,” and said the agency is considering transparent auctions and allowing sub-penny executions on exchanges to increase competition with market makers.

Wholesalers pushed back on the notion that retail brokers send all their orders to one place to collect a rebate in what is known as payment for order flow. Instead, wholesalers at STA described this as an “outsourcing relationship” where retail brokers rely on the wholesalers for order routing to venues, which subsidize the costs they would otherwise incur.

“They are outsourcing the hassle of having hundreds of millions of dollars to instead have nano-second/microsecond execution capabilities across 17 different national securities exchanges. That’s a very expensive preposition. We provide good customer service and a guaranteed execution,” said Cifu.

But the new rules could require retail brokers to shift order flow away from electronic market makers to seek midpoint prices through an auction mechanism. Also, a recent tweet by a Fox business reporter said the agency planned to announce a proposal to create auctions for retail orders in November, indicating it would initially be operated by Nasdaq and the New York Stock Exchange to be released in “tranches.”

The goal behind auctions is to “increase the likelihood that investors get the midpoint price on trades – which is half-way between the publicly displayed buying and selling price, or better,” reported the WSJ.

The auction proposal would apply to marketable orders of less than $200,000 by customers who average 40 trades a day, the outlet reported.

If brokers want to avoid the auctions, firms “need to fill the orders at the midpoint price or better,” according to sources the WSJ spoke to. The requirement would “effectively push brokers to work harder to provide midpoint prices for their customers,” wrote the WSJ.

Exchanges and alternative trading systems (ATSs) which offer auctions and midpoint pricing, stand to benefit from the proposal to introduce auctions for retail investors.  In an interview at STA, Michael Blaugrund, COO of the NYSE, said: “Markets function best when you get the maximum number of buyers and sellers into the same liquidity pool. Look at the opening and closing auctions, look at those moments when the market defragments and it’s very effective. It’s worth asking the assumption of whether those foundational assumptions are true.”

However, many speakers at STA cast doubt on whether retail investors would get better prices in a “theoretical” auction than they currently receive, particularly with less liquid, small and mid-cap stocks.

Cifu said that wholesalers guarantee execution at any size at the National Best Bid and Offer (NBBO). He said 55% of the time, there is not enough size at the NBBO to satisfy an order because it’s a stock that others are not quoting or interested in. “If you had an auction environment, we wouldn’t provide size the way that we do at the long tail,” said Cifu, who explained that market makers wouldn’t absorb all the losses in an open market scenario.

In an interview at the STA event, Haoxiang Zhu, Director, Division of Trading & Markets, shed some light on how the regulatory body is thinking about the auction concept for retail orders. “We are talking about what’s the best way to make sure that retail orders face the most competition on the liquidity providing side. Right now, if you look at the data, the wholesalers take a lot of the transactions, especially the market orders. The transaction is one-to-one,” said Zhu, a financial economist who analyzes the cost implications of policies.

Zhu said the SEC is also looking at the experience of fixed-income markets with auctions. Arguing that auctions are not new, Zhu noted that a few years ago the fixed-income markets were mostly bilateral, and the market innovated, citing the RFQ protocols that many are familiar with.  In fixed-income, traders “send messages to a bunch of dealers, and they will send back quotes, and this becomes name-disclosed multilateral auctions,” said Zhu. “The evidence we’ve seen so far, in the fixed income markets like corporate bonds, is the transaction costs are lower in auctions compared to the bilateral transactions,” said Zhu.

Even a fellow regulator raised concerns about “tinkering” with the market structure. In an interview at STA, SEC Commissioner Hester Peirce said, “Some of what has been talked about is much more than tinkering. It’s dramatically changing the way the market works.”

“For retail investors, they do get good execution in the markets. The markets are liquid. And so how can we take care as we’re approaching this project?” commented Peirce.

“Sometimes It can be tempting for a regulator to go in and say, if we adjust this lever here or there, we’d might make better markets, or in this case, this would be a cool experiment. Let’s try order-by-order competition on an auction basis. But we’ve got to be careful when we are walking into a well-functioning market and making that kind of change,” said Peirce.

On the institutional side of the business, some brokerage executives voiced support for making retail orders more accessible. “I believe that there is actionable liquidly in the marketplace today that is not matching appropriately. I think there are ways to do it better,” said Joe Wald, managing director and co-head of electronic trading at BMO Capital Markets.

While speakers said there is some industry consensus on auctions, others raised concerns about the prescriptive nature of an auction. “In theory, order-by-order competition would be phenomenal. In practice, it could break a lot of different things,” said Wald. “Ultimately, finding a way for us to bring together liquidity is the key,” he continued. He said that regulation has driven innovation and competition, and the markets have been innovative through inventing new order types and different venues.

“What we want to do is maximize the interaction between natural liquidity as much as possible and some form of more transparent order-by-order competition is a way to do that. We haven’t seen a proposal yet to even understand what this is going to look like. But I think the goal of it is one that will benefit the market and will benefit all real liquidity for market participants,” he said.

Commentators said auctions in the options market did not get that much participation so that their introduction in equities could be less impactful. “The call for order-by-order competition ignores the competition between venues that we have now,” said Joe Mecane, Head of Execution Services at Citadel Securities, referring to Reg NMS.

Another concern was that auctions could snowball to impact firms running an institutional execution business which could be asked to make their orders more accessible to interact with. Institutions that participate in alternative trading systems (ATSs) are another example of segmented order flow which get to interact with certain counterparties.  “We must be careful what we ask for. I mean, why stop at retail? Why shouldn’t all markets work that way? Soon you have scope creep,” said Mecane.

One retail brokerage firm executive said he understood the logic behind the SEC’s interest in auctions, but suggested the agency is missing something. “There will be fierce competition for a subset of orders and names,” said the brokerage executive, who noted the online brokerage firm had modeled it. “For over 50% of our volume, we don’t think there will be very robust competition for our orders, or any participants participating in an auction,” he said.

“Retail clients have an amazing experience today,” said the executive, adding, “But, they don’t necessarily understand or pay attention to the ecosystem if the price they see on the tape is where they get filled or better. If that experience changes, we’re going to hear about it,” said the brokerage executive. “Then you start to get into an environment where you lose trust. It’s going to be like a Black Friday sale, and only one person can get the price,” he said.

Beyond auctions, STA panels examined other ideas from Gensler’s June 8 speech, including narrowing the tick-size increments for quoting and trades and adding odd lot trades to the consolidated tape.

Some trading executives said the agency should move forward with narrowing the trading increment to increase competition, since that is part of the Market Data Infrastructure Rule already passed by the prior SEC chair Jay Clayton and held up in a recent DC circuit court decision.

“A MEMX study found a number of securities are tick-constrained with transaction costs that could be reduced. We applied to the SEC to allow half-a-penny increments in just those securities,” said Adrian Griffiths, Head of Market Structure at MEMX, on the exchanges panel.

Other industry executives were open to the idea of tick-size reform on a limited basis if applied to a subset of stocks, and some warned against a one-size fits all approach, citing the buy-side’s concerns over fragmenting liquidity and sub-penny jumping.

Overall, industry executives and regulators were open to discussing the proposed equity market structure reforms when the details are available. “I’m all about having an open honest and data-driven debate on these topics,” said Virtu’s Cifu.

Executives at STA also suggested that the industry could file lawsuits to prevent the SEC’s rule proposals from being implemented.

Meanwhile, political consultants speaking at the conference suggested that the results of the mid-term elections in November could slow down the SEC’s agenda. If Republicans win control of key financial services committees in the House and/or Senate, they are expected to conduct oversight over the SEC and require the SEC chair to testify more frequently. However, it’s not clear that this will cause the SEC’s regulatory agenda to grind to a halt, though it could take years for the rule-making process to play out.